For the past few days, I have been trying to write a short, simple post on phonemic awareness. I start out fine, but by the third paragraph I am mired in the tongue-twisting vocabulary needed to describe this important area of literacy development, and I give up. Today, I had the great idea to find someone else’s blog explaining phonemic awareness so I could finally take ad 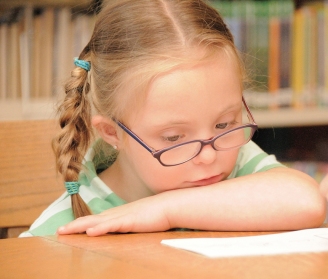 vantage of that nifty “Press This” button on my blog (probably created for just this sort of situation). But that didn’t work out, so here is my not-quite-short-nor-simple explanation of phonemic awareness.

Phonemic awareness is one of the five “building blocks” of early literacy instruction cited by the National Reading Panel. In fact, it is building block #1 because it is a skill that develops before all the other skills needed to learn to read. It is also an area where many children with Down syndrome struggle tremendously. The good news is, phonemic awareness skills can be taught and mastering these skills can pave the way for children to become successful readers.

Phonemic awareness is “the ability to hear and manipulate the sounds in spoken words and the understanding that spoken words and syllables are made up of sequences of speech sounds” (Yopp, 1992).  An important point to remember about phonemic awareness is that it refers to the sounds (or phonemes) of spoken language, not to the letters (or graphemes) of written language. Once you start to associate sounds with written letters, it’s called phonics, but that’s another post. Here are some examples of phonemic awareness skills:

Since phonemic awareness is needed to acquire reading skills, and it has been shown to be an area of difficulty for children with Down syndrome, it is important to begin to address these skills early. Here are some resources to get started:

One final note about phonological awareness and children with Down syndrome. For some reason, many children with Down syndrome never learn to rhyme. Because rhyming is a beginning step on the ladder of phonological awareness skills, a child may be stalled in his reading instruction because of the belief that you can’t move on until the child masters rhyming. Not true. Just move on. It is possible to learn to read without mastering rhyming.

6 thoughts on “Would you mind going over that phonemic awareness thing again?”

What are your thoughts? Cancel reply